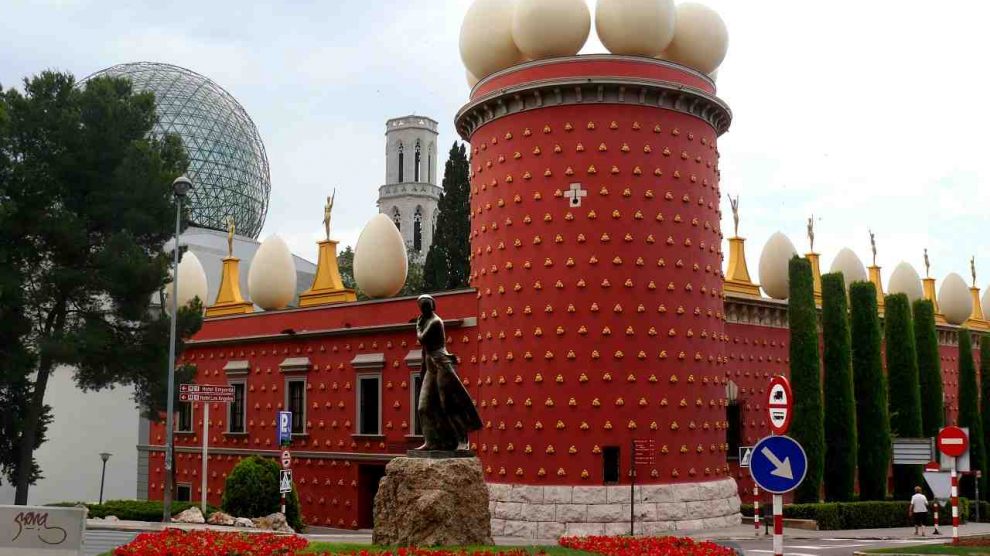 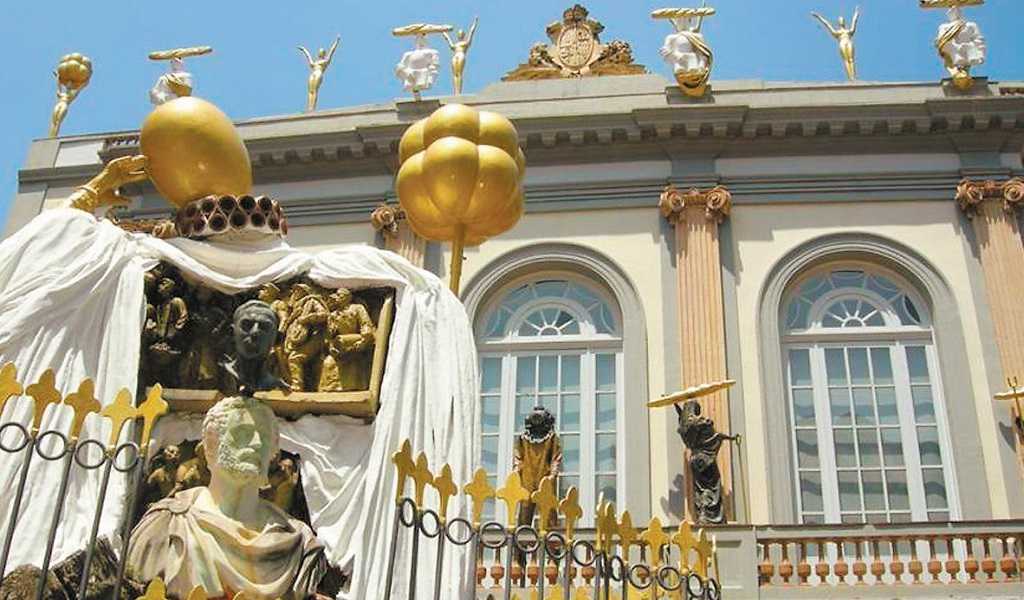 Salvador Dali Museum building is the municipal theater of Dali’s childhood and he opened up his first exhibit in the second floor at the age of 14. The building was in ruins for years because it was bombed in Spanish Civil War and also in 1960. The building was granted to Dali by the City Council of Figueres. The half-ruined building was rebuilded by enlarging it and was opened in 1974 as a museum. Including 4000 artworks from Dali’s own collection, this is the world’s largest museum dedicated to Salvador Dali. When designing the museum, Dali wished the museum to be theatrical, sensational and the largest surrealist object of his life.

Besides the paintings of Dali, there are sculptures, three-dimensional collages, mechanic works of all artistic periods and also a living room designed in the form of the face of Mae West, one of the famoust American actrists who Dali was admired. Apart from his own artworks, in the museum you can see different paintings from his private collection, paintings of El Greco and Marchel Duchamp, and a gallery dedicated to Catalan artist Antoni Pitxot who was also Dali’s best friend.

What To See In Dali Museum

Among thousands of artworks in the museum, the most important ones are the following;

Exterior Of The Building

“Loaves of breads” on the outside walls of the building which symbolize abundance, egg figures on the roof which symbolize fertility and reproduction and the life’s smallest unit atomic figures give the first clues of Dali’s art.

The mannequins waiting on the roof salute the visitors approaching the museum. The work standing on the tires, which you will see when you reach the entrance at the front façade, is devoted to 19thcentury French painter Meissonier. Besides, there is a work outside in commemoration of Catalan philosopher and writer Francesc Pujols whom Dali admired. Also, diving suit above the entrance door symbolizes the journey to human subconscious through psychoanalysis. Dali wore this original suit at a party and nearly suffocated.

A charming Ganymede statue with a hat made with jewels is noteworthy. Ganymede is the son of Tros who founded Troy and symbolizes homosexuality in Greek poetry. It is an allusion to homosexuality which Dali was trying to hide, while he was interested in it. 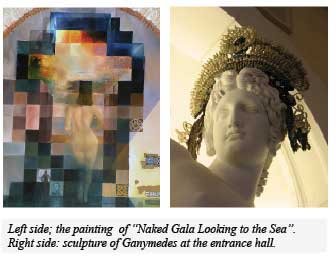 This wide area, once covered up before being demolished, was the place where the seats were at the old theatre. Mannequins welcoming the guests and horror element grotesque figures on the walls draw your attention. At the most upper parts, washbasins with angel-like figures encircle the yard. The letter G inside the flower bed symbolizes Dali’s wife Gala, the second important woman figure in his life after his mother.

The installation in the middle of the yard is the biggest mecanic surrealist artwork in the world. The Cadillac you see was given as a gift to Dali from his close friend Al Capone, the famous gangster from Naples. Only six cars were produced from this model. Dali broke the window of the car to attribute it to Al Capone and act of violence. The huge statue of Persian Queen Esther on the car is made from bronze. This statue given as a gift by

Austrian surrealist artist Ernst Fuchs is serving as a radiator cap at the same time. There is a system which starts a rain inside the car when you insert a coin from the side of the car. When it rains, the snails accompanying the driver and passengers become happy.

The boat crowned with an umbrella belonged to Gala. This boat is placed on a column of tires with props, which have an important place in Dali’s imagination. The bust on top of the column, which is made from a delicate marble, represents François Girardon. Girardon is the sculptor of Versailles Palace. When you insert a coin from the side of the car, it rains inside the taxi and at the same time, the umbrella at the top opens and closes.

This section is the stage at the old theater house. Impressive geodesic dome is both Figueres’ and the museum’s most symbolic structure. At nights, the reflection of the dome falling on the glass wall separating the courtyard and the stage forms a second dome image above the open courtyard. 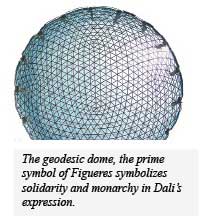 The main figure in the huge oil painting, which is on the wall forming the stage of the theater, is Gala. The artist, during his New York days has designed this painting for Labyrinth Opera, where its first premiere performance was held at the New York Metropolitan Opera in 1941.

This opera tells the story of King Theseus and Ariadne in mythology. With its gigantic dimensions, it is Dali’s most sinografic work. There are phantasmagoric sceneries in the composition. Behind Gala figure; Island of the Dead, mentioned in the play, and cypress trees which symbolize the life on the island are seen.

The Grave Of Dali

The tomb on the ground, which stands in front of the Labyrinth painting, symbolizes Dali’s grave. The grave is in the crypt room one floor below.

Gala Nude Looking At The Sea

This oil painting looks like nude Gala from the back and if you look with a squinting eye or 18 meters away from the painting, it appears as Abraham Lincoln, the president who had abolished the slavery in United States. This artwork is the first one which created digitalized effect in the art of painting.

The drawings of the artist which he referred to as treasure are exhibited in this room. The walls of the room are covered with dark red velvet cloth, resembling a jewel case. These paintings which Dali highly esteemed are not displayed in chronological order.

Since this ruined part of the building was used as a fish market of the city, it is called accordingly. You can see the famous “Beethoven’s Head” which he made by hitting the live squids on the canvas, the traces of the espadrilles which Dali loved very much and wore frequently,”new year cards” he designed for a company and a series of jewelry designs.

room for her whom he admired very much. This room is one of the most interesting and popular sections of the museum. Nostrils like fireplace, lips like sofa and eyes like Seine River view on a cloudy weather complete Mae West’s face. By looking through the lens that is between the legs of the camel, which you reach by climbing the stairs, you can see the whole work. The camel in the room was gifted to Dali by Camel Tobacco Company.

Across of Mae West room at the same floor, the other works worth seeing are; “Venus de Milo” (Goddess of Love, Aphrodite) statue, costumes which he designed for French fashion brand Dior, “Palace of the Winds” room and ceiling pictures of the room, sketches of the artist, bedroom, shoe shine box which he bought during his Istanbul trip and some of the artists’ special stuff which he used at his home.

With its red-painted façade and huge eggs on its roof, Torre Galatea (bears the artist’s wife, Gala’s name) as part of the building could be distinguished from the main museum building. In the last rooms at the first floor (as a part of the tower) you can see the graphic, optical and stereoscopical designs, holograms, some paintings from his later periods including the last painting as well.

At the second floor you can see a painting gallery devoted to Dali’s close friend Antoni Pitxot, Dali’s some graphic designes at the corridor and at the third floor a room dedicated to the “masterpices” from his own collection.

In the Jewelry Room, which has a separate entrance from the side wall of the building, you can see interesting jewellery designs, of which Dali designed the most of them during his life in New York. The entrance of this saloon is on the right hand side after you exit outside from the first floor.