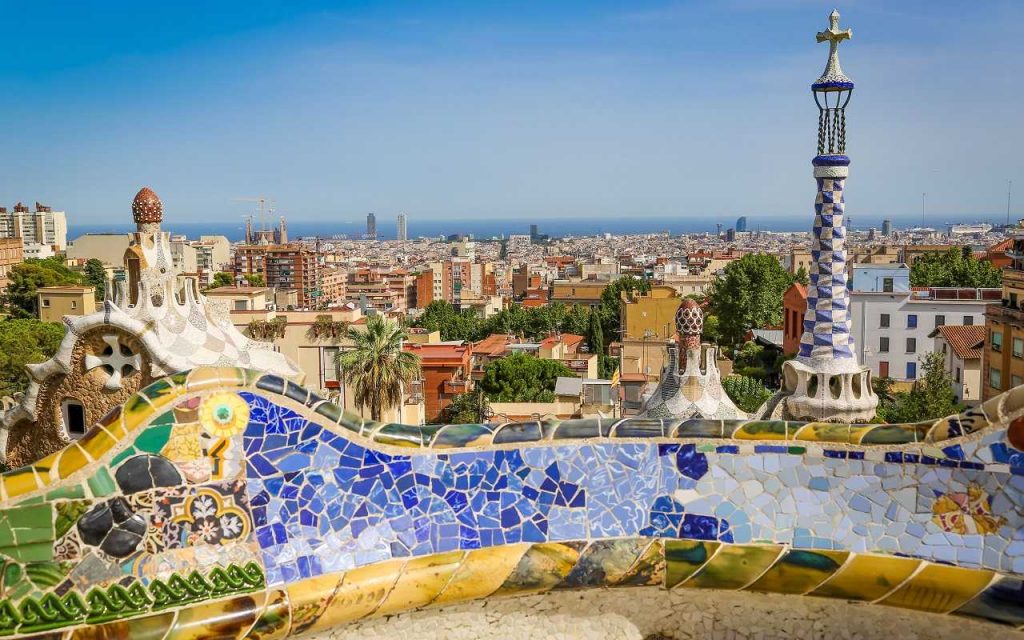 No other work of Antoni Gaudi can summarize the artist’s spirit and style in a single work like Park Guell. Richest industrialist of his era, Eusebi Güell made a deal with his close friend Gaudi for him to carry out a building complex consisting of mansions of which Güell was very impressed in a trip to England. For this 40 mansion project, a bumpy land of 15 hectares with a surrounding forest and a birds-eye view of the city was chosen. However; one mansion, a building which Gaudi had been lived in for years (now a museum) and two administration buildings with fairy tale decorations at the main entrance of the park could only be finished.

The construction, which began in 1910, had been terminated in 1914 due to economic problems faced by Eusebi Güell before it could be finished. Later on the park is bought by the Municipality of Barcelona and it was open to public between 1918 and 1984.

What To See In Park Guell

The square-terrace, on which Hospitality Hall (Sala Hospitalia) is located, is surrounded with a 110 meters curved sitting bench with “trencadis” craftsmanship to its three sides. Gaudi designed this bank with the help of architect Josep Maria Jugol and this is the world’s biggest bench.

Terrace walls, designed as a birds’ nest by Gaudi, resembles a flowerpot with the trees and flowers planted on it.

Seeking to provide easy access between different parts of the park; Gaudi built three-leveled viaducts (all in different styles) using the stones mined from the park. Colomns supporting the galleries are inclined and their end points are designed as semi-circles. Some of the colomns are decorated with figures like “laundry lady” and “fruit vendor”.

If you turn your back to the sea, the white mansion up the slope is the only house in the park that is completely finished. Martin Trias, a famous lawyer of his era, lived there. Today, the house is a private property.

Built as the site’s market place, this hall stands out with its remarkable acoustics, its ceiling decoration with trencadi craftsmanship and its 100 Doric colomns. The artist designed this hall, inspired by the Apollo Temple in Greece’s Delfi Ancient City. Not a fan of straight lines, Gaudi broke off the monotony by putting asymmetric colomns in between.

Trencadi-crafted water salamander figure, greeting the visitors at the park’s main entrance and functioning as a water fountain, is the most photographed art work of Barcelona.