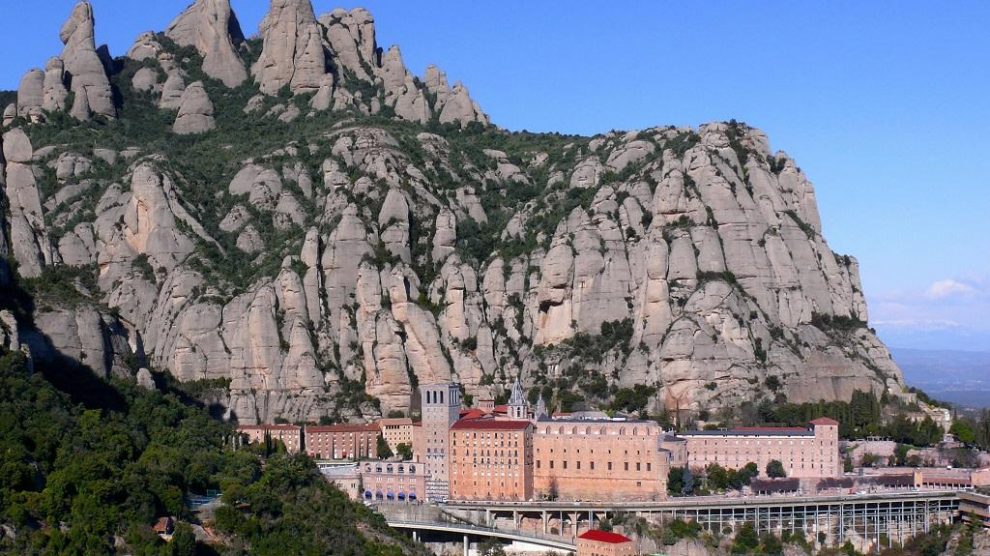 Santa Maria de Montserrat where is located in Montserrat Mountain where is 62 km’s away from the center of Barcelona and also is the most sacred monastery of Catalonia.  The monastery was built on a steep cliff and has an important place in Catalonia’s religion life. Montserrat Monastery is a glorious Benedictine monastery complex, resembling a small village. The reason that the monastery is built in such a hard place to reach is that the

miracle rumored was happened here. Monastery was built near the cave where Virgin Mary was seen in 1025 and the name of the monastery was dedicated on this miracle. The monastery was wrecked by Napoleon’s armies during Catalonia’s invasion in 1811 but was rebuilt in 1835. 80 priests live in the monastery and also the complex attracts thousands of pilgrims all over the world by having a famous holy figure of Black Madonna (La Moreneta).

The monastery also houses one of the oldest printing houses in the world. This house (Publicacions de l’Abadia de Montserrat) published the first book in 1499 and today still functioning.

How to Get to Montserrat Monastery

Montserrat Mountain and the Monastery is around one hour away by public transportation from the center of Barcelona. You may find opening hours and how to get to by bus or train, below. Alternatively you may join in a guided excursion from here for an easy and time saving visit.

Transportation By Train From Barcelona

Get on the R5 line, going to Manresa from Espanya Train Station in Plaça de Espanya. Since this station is a little confusing to find the R5 platform and possible ticket lines it would be better to get there a little earlier. Earliest train departs around 8.30 and there are 12-15 roundtrip services daily. It is useful to look at the timetable beforehand because train schedules are vary.

You have two alternatives to climb up to the place where Montserrat Monastery is located, after you get off at the foot of Montserrat Mountain:

During purchasing your train ticket in Barcelona, you have to specify which one will be your choice to climb up. Despite both of the tickets have the same name and price, you cannot change your vehicle preference afterwards. If you preferred to climb up by “Aeri” you need to get off at “Aeri de Montserrat” station…or if you preferred to climb up by funicular (cremallera), get off at the next stop, “Monistrol”. Last train services returning to the city are around 18:00-18.30 and total travel time is approximately 1.5 hours in one way. In the meantime it is recommended to watch out for pickpockets at the train station.

If you don’t have fear of heights and are willing to stay on foot, you can take magnificent photos from the cable car while you will be reaching in 5 minutes. In the funicular, you have the advantage of sitting and the journey lasts 15 minutes. For round trip journey by train, ticket fares cost around 20 € in total.

What To See In Montserrat

Montserrat Mountain is reminiscent of Cappadocia with its extraordinary rock formations. By changing into a surrealist reddish color in sunset, Montserrat is an inspiration source to many Catalan artists including Gaudi.

Gaudi was inspired by this impressive red color when designing La Sagrada Familia and so was his peer, architect Jean Nouvel, when designing Torre Agbar in the year of 2000’s. In Catalan Language “Montserrat” means “threaded mountain”. It is located in the middle of the most densely populated area of Catalonia and with a height of 1236 meters from the ground level it is the highest mountain of Catalonia after the Pyrenees. With this ideal location and being within the range of vision it always had an important place in Catalonia’s cultural and spiritual life.

The story of Montserrat Monastery, which is full of miracles, dates back to 880 AD, 1100 years back; a group of shepherd-boys saw a light beam descending to the mountain from the sky, accompanied by a heavenly music and they felt a glow of peacefulness. Running home, kids tell their families what they experienced. Suspicious at first, families then believed their children and they went to the place where the incident had happened. They also witnessed the same miracle and observed every Saturday for a month. Local people believed that this was a sign of God. A local pastor called to the region and he also witnessed the same incident and were recognized that that these images are intensified in a cave in the mountain. Archbishop of Manresa city nearby and other notable religious leaders also witnessed an image of Virgin Mary upon entering the cave in mountain. From this miracle on, this holy cave became a place of pilgrimage for Christians. Today, this cave is located near the monastery and you can get there on foot to visit.

Admission is free of charge. Built in 16th century, this basilica is the church of the monastery. Flat-roofed and square-shaped bell tower to the right of the entrance is the oldest part of the church and was built in the

14th century. Located on the façade of the building, “Jesus Christ and 12 Apostles” themed stonework dates back to 1900 and is well worth to see. Restored again in 1990s, interior decoration of the church is eloborated with a mixture of fine Gothic and Renaissance art dating back to the first half of 16th century. Nave part is made
in accordance with Catalan-Gothic style.

Protected by a glass, the famous statue of “Black Madonna” can be seen on top of the main altar of basilica. This holy statue is believed to have been made in the years when Christianity was born. It is made of wood and it had changed color over centuries especially because of the soot of candles used in lighting. Additionally some miracles attributed to this statue are also mentioned. The statue holds a sphere symbolizing the world in its hand outside of the glass protection. Pilgrims enter the queue to touch or kiss the hand of the statue. If there is a lot of queue, you can visit Black Madonna in the afternoon or in the choir time at 13:00 to not to wait so long in the queue.

Rites are organized at the basilica every day at different hours. Participation is free. Most important three of these rites are at 11:00, 12:00 and 19:30.

Plaça de Santa Maria. Open every day. Entrance fee: 7 €. Here, is a very rich and underappreciated collection with 1300 pieces, from Egyptian mummies and Gothic church altars to the paintings of famous painters such as El Greco, Dali, Monet, Renoir, Degas, Caravaggio, Fortuny, and Picasso. History of the monastery and lives of the priests at the monastery are being told with multimedia devices in the other part of the monastery, Espai Audiovisual.

Admission is free of charge. If you follow the “Cambril de la Mare de Deu” sign in the courtyard of the basilica, you will see the black, Romanesque-style bust of Virgin Mary, the second most important statue to the pilgrims in the monastery. The arrangement of the room was made in an early-modernist style by Antoni Gaudi, when he was still a student.

Having released more than 100 albums, world-famous Montserrat Children’s Choir is the world’s oldest (founded in 1223) and can be listened to every day in the basilica at 13:00,

free of charge. Choir generally sings Gregorian and religious-themed songs; it is recommended to not to miss it. No concert is given during June, Christmas and some other national holidays.

The Peak of the Montserrat Mountain

Upon climbing to Montserrat Monastery, you can climb further up and down, to and from the peak of Mount Montserrat by funicular in exchange for a roundtrip ticket of 10 €. In clear weather, you have the chance to see all of Catalonia and even the Island of Majorca in a panoramic view from here.