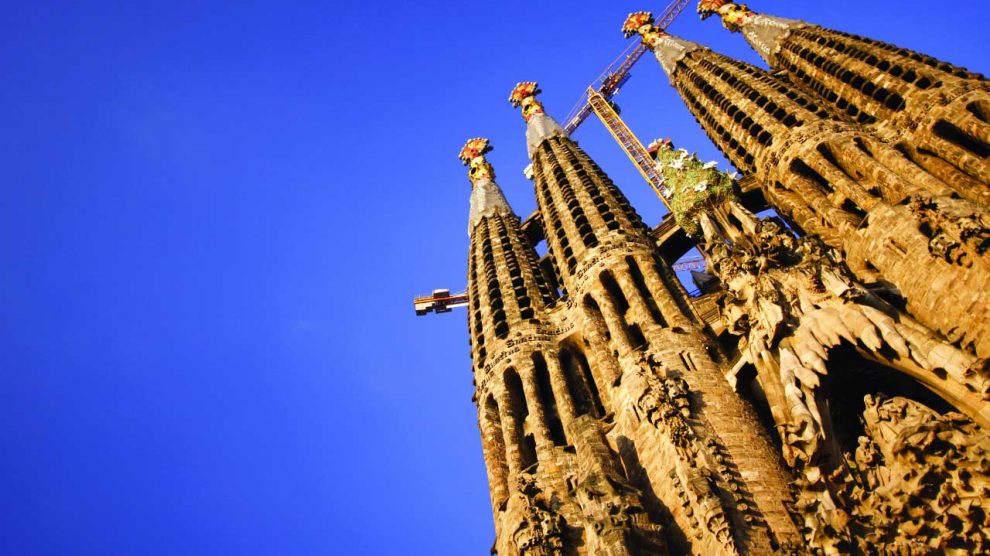 In Catholic belief, “Sagrada Familia” word refers to the holy family concisting of “Jesus Christ, Virgin Mary and Prophet Joseph”. One of the most genuine and extraordinary religious structures of the world, this monument is Gaudi’s the most famous work and undoubtly, the primary symbol of Barcelona. Started in 1882, construction of this fantastic, unususal church is still ongoing. Sagrada Familia Barcelona which also known as the “The Unfinishing Church”, this building is planned to be completed on Gaudi’s 100th anniversary of death, in 2026.

A religious association commisioned the construction to architect Fransesc de Villar in 1881 but due to disagreements Gaudi who was 31 years of age at that time was choosen to continue the work. Gaudi remained faithful to the cross-shaped base plan initially but redesigned the project with enlarging the church to 95m x 60m in sizes and 13.000 people capacity, consisting of a 170m tower and 18 other 100m towers.

La Sagrada Familia Barcelona is a basilica (large and important church), not a cathedral and is dedicated to Prophet Joseph (Sant Jozep), who is adopted as the patron saint of workers and families in Christianity.

Gaudi wanted to reveal a monument where symbolism was at its peak. He was inspired by nature in all his works. He was not fond of straight lines; he believed that straight lines did not exist in nature. This church, where we clearly witness the fusion between Catalan Modernist Art and Neo-gothic art inspired by the interesting topographical structure of Montserrat Mountain near Barcelona and thus; natural-looking embossed and protruding textures were predominantly used on the towers and building’s façades. If the outer façades are carefully examined, it can be seen that some parts are light in color and some parts are darker. This is due to the fact that this a kind of stone blackens over time .

In the original plan, there were 12 bell towers in total, representing four of Jesus’ apostles in each façade. The “apse” is made by dome-shaped towers representing Virgin Mary and four bigger towers (not yet built) will symbolizing the four Gospel authors (Matta, Markos, Luka and Yuhanna). Biggest tower 170m high to be built in the middle of these 17 towers represent Jesus Christ.

Three monumental façades of this structure and its 18 towers were dedicated to important figures of Christianity.

It is dedicated to the birth of Jesus Christ. It is the one and only façade that was been completed under Gaudi’s supervision at the peak of his mastership. It is comprised of three doors, the one in the middle being the main portal, and four gothic bell towers.

All the three doors are decorated with important dogmas of Christian faith and with figures depicting the birth, childhood and youth of Jesus. Gaudi made most of the reliefs at the entrance with his hands extemporarily, like a painter. Gaudi used real animal and human bodies when he made molds of these works. There are allegations that some of the figures were made with human bodies secretly obtained from the morgue.

Between three doors are two columns with dazzling decorations and crowned with palm branches. Four angel figures symbolizing the four winds blowing from four directions on the four columns placed on four turtle figures heralding us the imminent end of the world. Turtle symbolizes “constancy, warranty and the power of the universe” in Chinese culture. In contrast, two “chameleon” figures located at both sides characterize the constantly changing nature.

The Door of Charity (in the middle)

This door in the mid is separated into two with a column in the mid and above of this column, the birth and baptism of Jesus Christ together with Virgin Mary and Prophet Joseph is portrayed. The Door of Charity adorned with reliefs mostly related to the birth and childhood of Jesus. If carefully examined; you can distinguish figures of barn, ox, donkey and shepherd referring to the shepherding period in Jesus Christ’s childhood. Additionaly some other figures like king and musician angel also could be seen. You can see a “tree of life” symbol at the top of the main door and an angel holding a glass and pelican at the bottom of the tree. This symbolizes the “bread and wine ritual” of Christianity. The letter X on the Tau cross at the top of the tree symbolizes the first letter of Christ’s name (Xesus) and the pigeon figures on top of it characterizes the Holy Spirit.

The Door of Hope (left)

This door is devoted to Jesus Christ. At the very bottom of the door, the figures start with flora and fauna symbols of the River Nile and its surroundings. In the upper right part, one can see the figure of cruel king Herod killing children before the birth of Christ. In the middle, conversation of Prophet Joseph with Baby Christ is depicted before he ran away to Egypt. Depiction has been completed with Prophet Joseph’s carpenter tools. Above it, marriage picture of Virgin Mary with Prophet Joseph is found. In the upper figure; you can see that Prophet Joseph, who had been guided by the Holy Spirit, is in a boat with an anchor representing the church.

The Door of Faith (right)

This door is devoted to Jesus Christ. At the very bottom, figures start with flora and fauna symbols of Palestine geography and continue generally with portraits from Christ’s youth. In the middle is a portrait of Jesus as a preacher at the age of 13. Around this portrait, you can see bunch of grapes and wheat grains symbolizing blessing (communion) tradition in Christianity belief and divine symbols of hand and eye figures.

It is the southwestern façade. It has been designed on the theme of Christ’s last days and his death. At this façade that is designed by sculptor Josep Subirachs in the 1950s, the artist discontinued Gaudi’s embossed style but used the strong images of his own style.

These slim-bodied, hard-edged figures (which have been considered far from esthetics according to some art critics) and being away from Gaudi’s style had created serious debate and criticism in Catalonia. As in the Nativity Façade, the entrance of the this façade which is crowned by four towers is being supported by elegant columns and arches as Gaudi used frequently.

The figures on this façade are placed at three layers with an “S” shape; respectively starting with “the Last Supper” at the bottom left and ends with depiction of Jesus Christ’s burial at the top right.

The chuch was consecrated by Pope Benedict XVI in 2010 with a magnificent ceremony first service by elevating its status to a basilica.

This is a Latin cross shaped church and consists of five corridors. The height of the main nave’s arch is 45 meters and the highest; the height at the side naves reaches 30 meters. Behind the nave, the gothic apse is surrounded by seven chapels and inside the apse the altar with a lot of light coming from the windows.

The altar is crowned with a beautiful modernist canopy with a latin cross. And down floor of this point is the Crypt of Gaudi which is burried with the original plans of the church.

Gaudi inspired from nature as usual when designing the columns. The inclined branching colomns arouse a feeling like being in a forest. Column clearances are 7.5 meters. However, the columns in the abse remain outside of this order. The belt width of the main vault reaches 70 meters. Abse is closed with a hyperboloid vault of 75 meters in width. Gaudi used the arches of the dome to impress the visitor standing at the main entrance and he wanted the visitor to see a more pompous width of an abse at a later stage.

Same as the facades of this great building inside is also full of element of symbolism which is a strong sign of a Gaudi work. Some of the symbols refer to dioceses of Catalonia and Spain, apostols saints, the churches in Latin America and five continents of the world.

Although it has been 130 years since the construction started, it is still incomplete. The most important reason for this is that the construction costs have been paid by public donations since the beginning in order for it to be the “people’s church”.