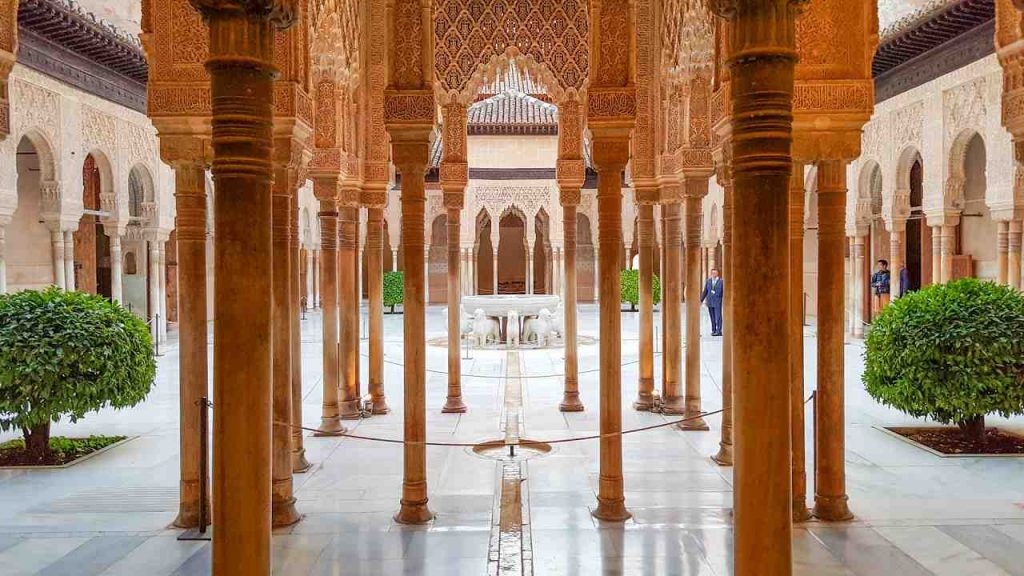 Finding & Buying Alhambra Tickets; The biggest challenge with the Alhambra tickets is to find the ticket since maximum 6000 visitors per day is allowed to visit in order to avoid damage of the rooms of the palace because of the heat and humidity. Tickets are sold long before so there are often no tickets available. Entrance to the palace should be done on the exact day and at time given in the reservation. For this reason, it is advisable to take the tickets before your travel and arrange your travel schedule accordingly. If you like you can buy your ticket here to guarantee your entrance.

Sights To See In Alhambra Palace

The palaces which was built by the Nasri Dynasty constitute the most glamorous parts of the Alhambra Complex. The entrance to the complex is the Mexuar.

(Masvar) section which was built in the 14th century. This is the entrance hall where viziers (ministers) and the council are gathered and at the same time those who want to meet with the Sultan are waiting. In the upper floor of this room (which is not exist now), the sultan used to watch the people in the room. Two hundred years after the Alhambra is captured by Christians, King Carlos V turned this place into a chapel. The ornaments on the walls are original while the ornaments in the ceiling is belong to the Christian era.

After passing the room “Mexuar”, the Golden Room (Patio del Cuarto Dorado) comes. This is the front courtyard of the palace. The door opening to the right and the symetrical entrance decorated with glazed tiles and patch works. The entrance to the left opens to the The Courtyard of Myrtle (Patio de las Arrayanes), the private living quarters of Emir Yusuf I, who lived in the 14th century.

The Courtyard of Myrtle consists of a swimming pool surrounded by myrtle plants and resting rooms opening to the pool. According to some sources these rooms were consisting the harem of the Emir. The traces of the cobalt-blue dyes, which were left in the “mukarnas style arches” of the niches in the north, are still visible. Visiters of Emir Yusuf, who passed through the adjacent Chamber of Ship (Salon de Barco), would pass from here to the Chamber of the Ambassadors (Salon des Ambajadores) to meet with the Emir. The ceiling of this hall is made up of mukarnas style wooden works symbolizing seven layers of sky, with 8000 pieces of intertwined cedar wood with grift star shape ornaments.

The adjoining Lions Court (Patio de los Leones) was built during the second half of the 14th century by Muhammad V while Granada was a shining star as a city. The pool of the twelve lions fountain is left from 11th century. The courtyard was designed in accordance with the golden ratio rules and geometric calculations of the complex geometric designs of Islamic art. The columns are arranged in such a way that they give symetrical vision in many aspects. The stucco ornaments on the walls also have reached the uppermost level here, like a handwoven lace.

If you walk clockwise in the courtyard you will see Ibn-i Sarrac Hall (Sala de Abencerrajes). Ibn-i Sarrac was a weathy family who had supported Muhammad XXII (Boabdi) against his father (Sultan Abu Hassan Ali) to took control the power. According to the legend, Sultan Abu Hassan Ali had killed his family members whom he saw as treason at this hall. The stains that are visible in the pool located in the middle of the hall are the blood stains that remain and do not come out. The multi-colored tiles and pentagonal ceiling decorations of the walls are also spectacular.

At the eastern wing of the Lions Court is The Hall Of The Sultans (Salo de los Reyes) and the “Ten Sultans” of the Nasrid Dynasty were portrayed in the leather ceiling.

On the north side of the Lions Court is Hall of Two Sisters (Sala de Dos Hermanas) where used by viziers for meeting purposes for a while. The wife of Sultan Ebu Hassan (Ali Muley Hacen) lived here with her child after she was rejected by Ebu Hasan’s other wife (also the mother of Sultan XII Muhammad). The name of the hall originates from the two marbles on the floor, not from a story as many people thought. Its walls are decorated with plantal ornaments such as pine cones and acorns. The ceiling was embellished with Mukarnas (Mocarabes) technique, which consisted of 5000 cells, made of wooden geometric ornaments in a vertically inclined, honeycomb form. In the calligraphic writing above the tiles at the eye level, a poem attributed to a victory of Muhammad V in Algeciras in 1369. There are three rooms on the sides of the hall and an observation place (Mirador de Lindaraja) with windows overlooking the garden of the sultan. The traces of the original paints on the window frames can still be seen.

You will find a passage through the Two Sisters’ Hall and a domed bathhouse, and from there you can see the rooms made for King Carlos V in 1520. This part was also used by the American writer and historian Washington Irving in the 19th century. From this section you descend into Court of Lindaraja (Patio de Lindaraja), a charming courtyard designed in the 20th century. You can see the inside of the hammam and its star-shaped lighting windows.

When you come out from the Court of Linderaja, you will arrive at the Old Palace (Palacio del Partal), the oldest surviving palace built by Muhammad in 1309.

Alcazaba, Christian Buildings And The Museum

The westernmost part of Alhambra Complex is Alcazaba which is the oldest castle which dates back to the 9th century. According to recent researches and excavations, there were some constructions here before the Muslims period. Alcazaba is surrounded by seven towers built at various times. You can climb by the narrow stairss to the observatin platform of Torre de la Vela (Observation Tower) which is in the middlemost. When Christians captured Alhambra, the last Muslim land in Iberian Peninsula in 1492, Christians celebrated their victory by raising their flags and crosses over this tower.

Next to the Nasri Palaces, it is impressive Palace of Carlos V but this building is also discordant with the elegant architecture of Alhambra Palaces. This is the unique Renaissance palace built in Spain which has a rectangular shape with a circular courtyard. The construction of the palace was initiated in 1527 by famous architect Pedro Machuca of Toledo who was also a student of Michelangelo. The palace was intented to built with the taxes that were taken from the Muslims (moriscos) who stayed in Granada and forced to become Christian, but after a while, the construction left unfinished because of the rebellion of Moriscos.

At the Alhambra Museum, handmade artworks found at the Alhambra, the original door of the Two Sisters’ Hall, paintings and sculptures dating from the Christian era are exhibited.

A little further ahead is the Church of Santa Maria del Alhambra, built in the 16th century, in place of the Alhambra’s mosque. Behind the church is the washing (ablution) area of the old mosque. Here also, The San Francisco Monastery which was built at the highest point of the hill, is now used as a hotel (Parador de Granada).

A 10 minutes walk from the palaces is Generalife, which means Cennet-ul Arif (The Paradise of the Wise) in Arabic. As its name, this part of the complex is like a paradise with its gardens, colorful flowers, vegetable orchards, pools and peaceful water ripples. During the Muslim period there were animal farms at the place of the modern gardens which was designed in 19th century. At the far north end is the White Palace (Acequia), which has a view of Alhambra.

The garden and the pool of this palace are extremely elegant and peaceful. When you enter to the second courtyard (Patio de Sultana), you can see the body of the 700 years old tree, whose body is still standing and shaded the courtyard for centuries.

The exit from the Alhambra is just outside of the Generalife Gardens.