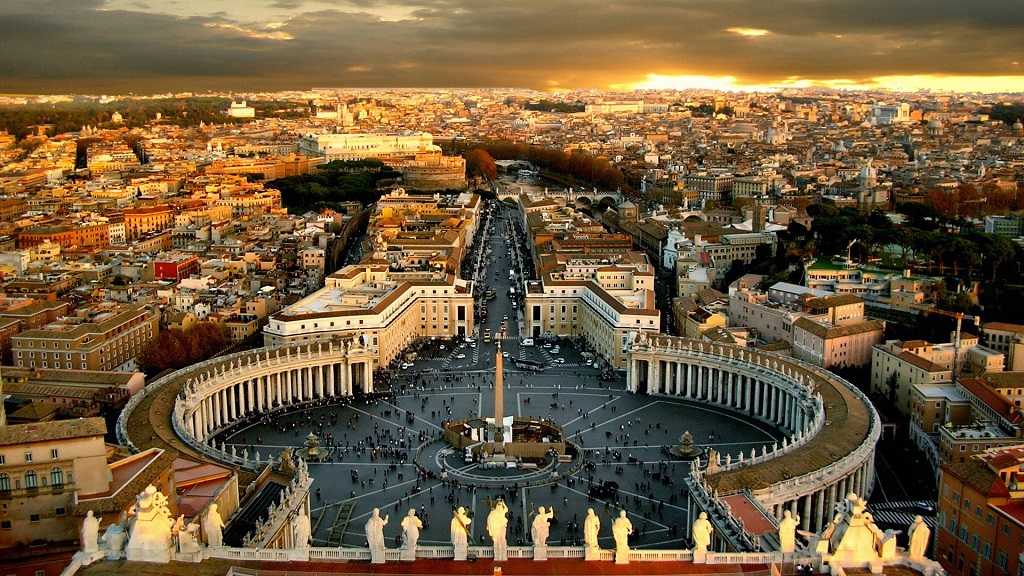 Vatican Museum Entrance Tickets; (Click to see the ticket prices and tours). Vatican Museums and Sistine Chapel is the most valuable touristic and cultural attraction of Rome. The museum has an anormously reach collection of art, especially paintings, frescoes and sculptures from Renaissance Period. These artworks were ordered and collected by the popes  for centuries… Besides of the museum, the famous Sistine Chapel is another jewel worth to see inside of the complex. In the meantime you will not need another ticket to enter the Sistine Chapel. Inside of the museum there are 7 kilometers of hallways, thousands of sculptures, valuable paintings, murals, Egyptian mummies and much more. All these valuable pieces are exhibited in 54 galleries. If you prefer to see the most valuable piece of arts only, without getting tired, we recommend you to join in the guided tours.

As of April 2021, the official entrance ticket price for Vatican Museums (including the Sistine Chapel) is 17 €. Or if you prefer to join in a guided tour the prices per person starts from 37 €. 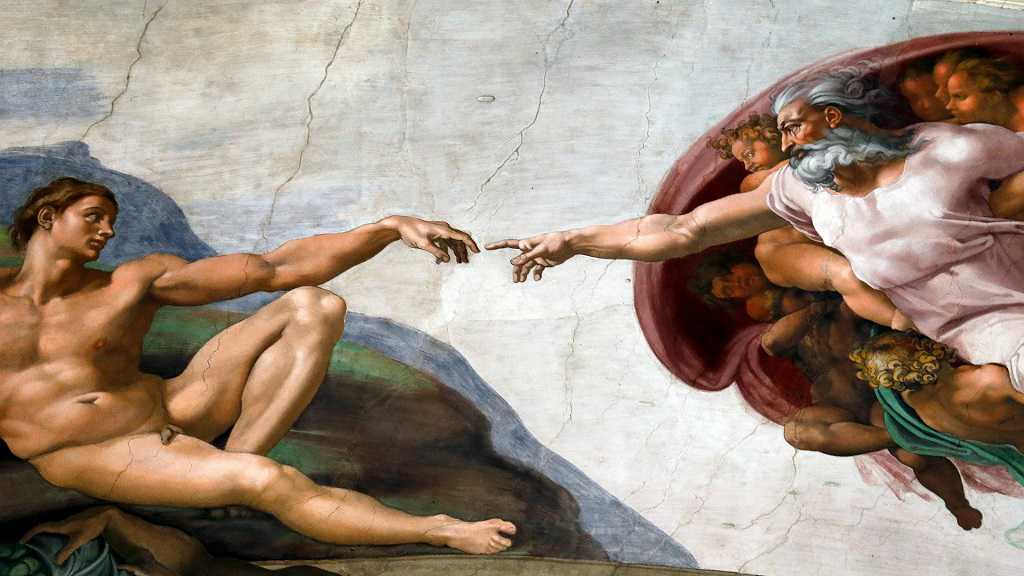 You may check the updated information here.

The Location and How To Go?

Vatican State and Museums are located near to the city center, neighbouring Borgo district.

How to go to Vatican Museum?

it is within the walking distance from Navona Square (2.6 km and approximately 25 minutes), Popolo Square (3 km’s) and Venezia Square (3.5 km’s).

You have to get on the red “Line A” and get off in the Ottaviano – St. Peter Station. From this station, it takes a few minutes to the entrance of the Vatican Museum and 5 minutes to St. Peter Basilica, by walking. This metro line also passes from the Termini Train Station and Spanish Steps.

Where is the entrance to the museum? 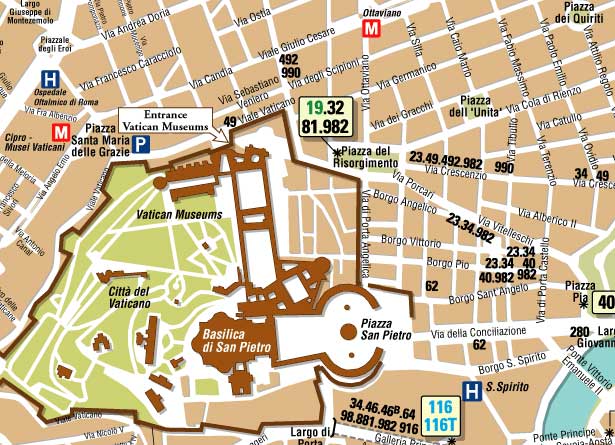 What To See in Vatican Museums?

Here are some of the most important artworks and galleries;

Here is the first acceptance place of the Vatican Palace, also known as Papal Palace, open to the public. It consists of four halls. This saloon opens into Belvedere Courtyard and at this saloon there are two masterpiece frescoes of Raphael, one of the most important artists of Italian Renaissance; The School of Athens (Scuola di Atene) and the Liberation of St. Peter. 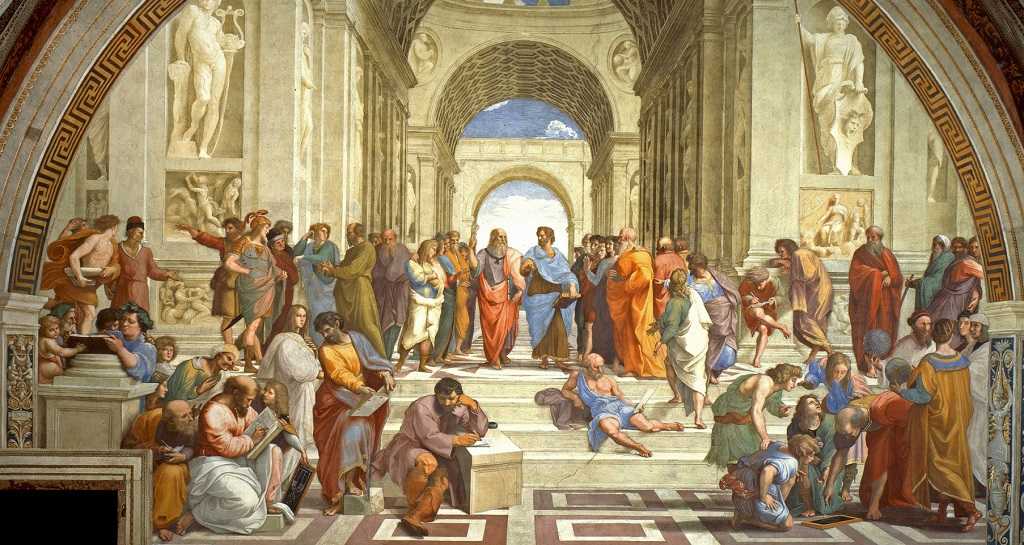 The School of Athens School (Sculola di Atene); this painting is one of the masterpieces reflecting the classical spirit of the Italian Renaissance. The painting gathers the most famous philosophers and scientists of the Ancient Greece on which the Renaissance art is based. The building depicted in the painting has Roman architectural elements rather than classical Greek architecture. You will see Platon and his student Aristotales, at the middle of the painting with blue and red dress. 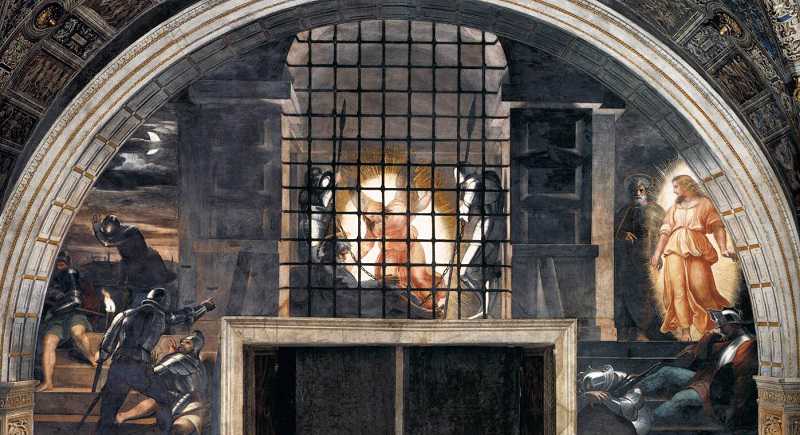 Deliverance of St Peter (Liberazione di San Pietro) / above;  the fresco shows how St. Peter was released from Herod Agrippa’s prison with the help of an angel. The painting has three scenes. In the middle, the angel awakens St. Peter, and on the right, is leading him to pass by the sleeping guards. On the left side a guard sees the light created by the angel and wakes up his friend by pointing the enlightenment in the cell. Especially the back-lit scene is the most impressive part of the frescoes.

This collection has been established by Pope Gregory XVI in 1839. Most of the artworks were brought by the Romans from Egypt and some of them were brought from Villa Adriana in Tivoli and some of them were bought from special collections in the 19th century. The Egypt section composed of nine rooms. Sculptures, figures made of clay, bronze objects, and monumental artworks are exhibited in this section. You can see the ancient artworks from Mesopotamia, Syria, and Palestine in the last two rooms.

This section was opened in 1973 and it is one of the new sections of the museum. In this section the portraits of all the popes from 16th century to today are exhibited. Additionaly you can see the interesting “papamobile” designs (“papamobile” are the vehicles used to carry the popes).

Here, you can see the Papal Throne made of red marble. This throne was brought from San Giovanni di Laterano Basilica, the former diocese of Rome. Red marble symbolises the reign and empery. The throne was adorned with mosaics and frescoes and its armrests have lion figures. 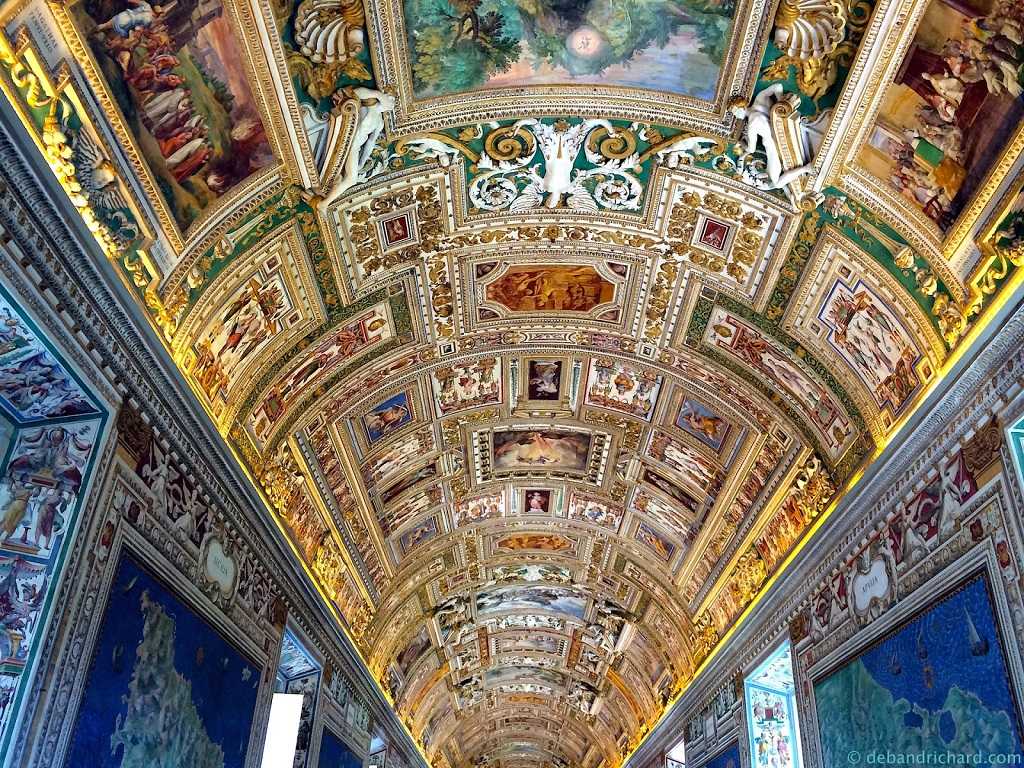 The Gallery of Maps is 120 meters high saloon, in the hallway form and on the west side of the Belvedere Courtyard. This room was designed in three years and completed in1580 by Ignazio Danzi. 40 colored topographic maps are exhibited on the walls of gallery. The ceiling frescos are the most important part of this gallery.

If you have visited the famous Roman Pantheon, you will see that this hall resemble it. The hall was designed in the Ancient Roman style and the alcoves of the hall were adorned with valuable statutes and the floor coverings were adorned with mosaics. The gold plated Hercules statute and red marble pool, where the rainwater is accumulated are worth-seeing. This pool had been rescued from the famous Golden House of Nero near by the Forum Area.

7- Gallery of the Statues

This gallery (Pio Clementino Museum) was once the loggia of the Palace of the “Pope Innocent VIII”. In 18 the century, it was covered with window walls to exhibit the statutes. The Gallery of Statutues continues until the “Gallery of Busts”. Most of the exhibited artworks are the statues from the ancient Rome and Renaissance periods. The walls of the gallery were adorned with frescoes, mosaics, city and nature landscapes and some of its parts are still visible today. The statues were put later to be exhibited. The Apollo Belvedere Statue is a replica of a bronze Ancient Greek statue and sculpted during Roman period and has been symblizing the perfectness of the aesthetics of the male body for ages.

“Laocoon and His Sons” is another iconic statute you should see. It describes the agonizing killing of The Trojan Priest and his sons by the snakes sent by Goddess Athena.

This painting gallery is composed of 18 halls and it is the most perfect and richest painting gallery in Rome. You can not see so many masterpieces together in another place in Italy. We recommend you to not to miss the following paintings in the list below;

There are two staircases in Vatican Museums known as the Bramante Staircase. One of these was made in 1505 and located in the tower of Belvedere Palace. The famous Bramante Staircase is also called the New Bramante Staircase and it is located in Pio Clamentine Museum. You can not miss this staircase because you will have to use it during the entrance and exit of the museums. The new staircase was designed by Giuseppe Momo in 1932 by being inspired from the old staircase. This monumental spiral stair, also known as the snail staircase, is the most photographed staircase inthe world. The people climbing up and coming down the stairs do not meet each other due to the double deck original design. 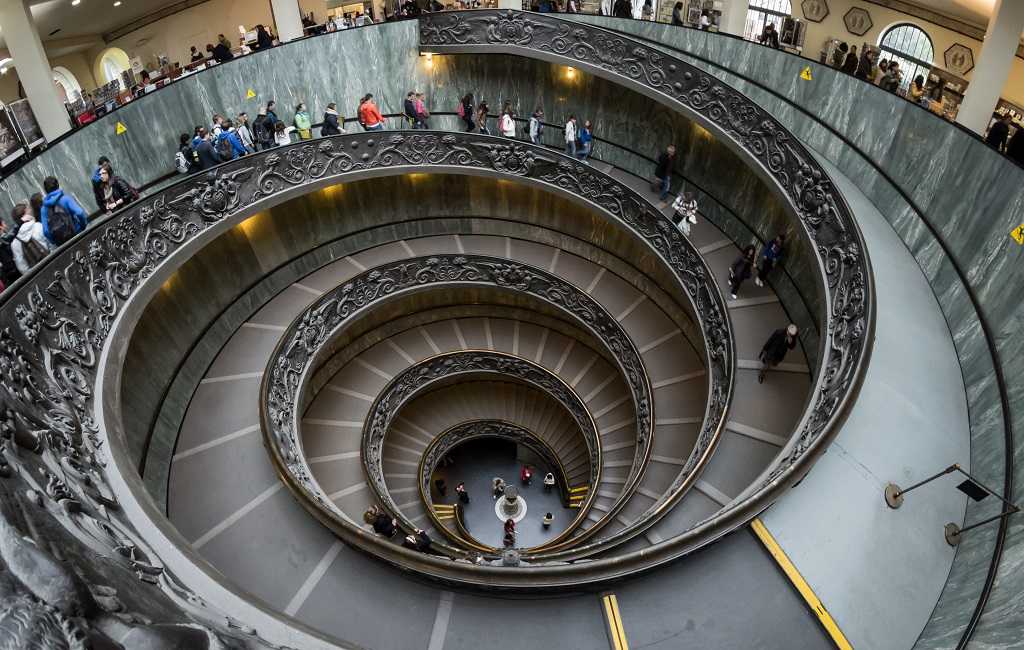